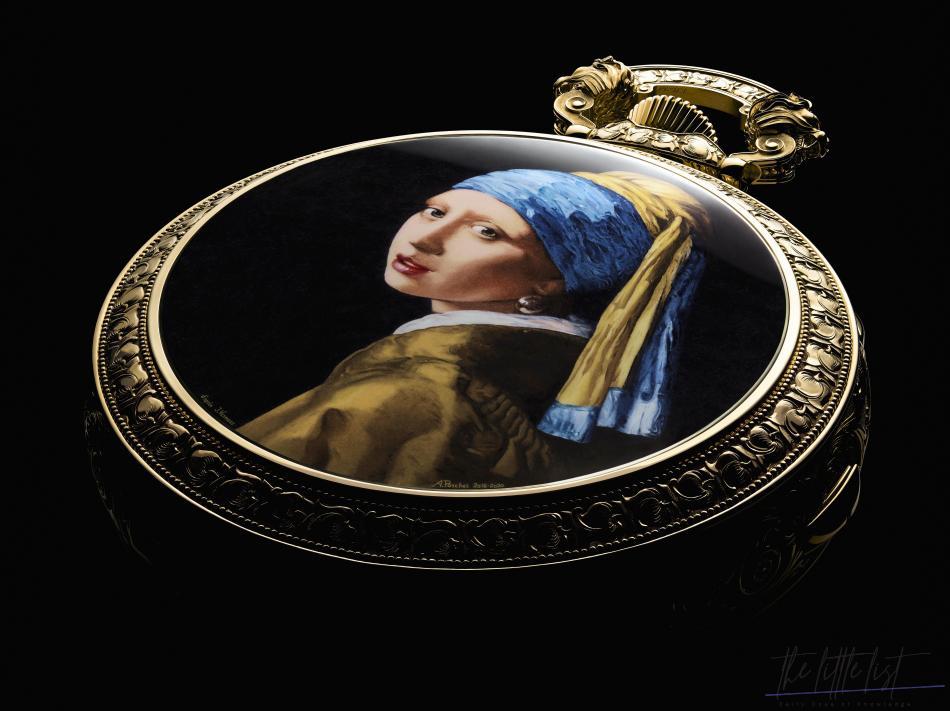 Another peculiarity of the flow of hours, the caliber incorporates a double-wheel system with catch-up play. Given the size of the hands, to avoid the jerking of that of the seconds positioned at 6 o’clock, such a mechanism ensures its fluid flow and without jerk thanks to a system based on two coaxial toothed wheels connected by a spring serving to eliminate the backlash.

All the components are finished by hand, from the cock or balance bridge entirely engraved to the grinding of the bridges with diamond paste for a polished-blocked finish, including the galvanic treatment of the plates decorated with Côtes de Genève and tinted champagne color for a rendering evoking the great traditional watchmaking.

The work on the ratchet wheel and the two barrel wheels is a prime example of these meticulous tasks. The wheels first underwent a surface treatment in the form of sandblasting and then sunning, before the teeth were glazed on the five gear portions.

This type of finish consists of chamfering the teeth and giving it a polished-blocked finish on the flat parts, a skill formerly used in watchmaking and that the Geneva house is committed to preserving. A week of patience and thoroughness was needed to decorate these three components.

The tuning of the tones also requires a perfectionist spirit. First tested before casing, they are shaped so as to obtain the right score for each of them. This inevitably requires retouching with a file for a perfect sound.

Once the chime is engaged, however, surprises are not excluded. On this piece, two of the five original stamps have been replaced for the sake of harmony. By modifying the steel alloys, the sound of the two new timbres took on more crystalline tones in perfect harmony with the other three.

This “tuning” of the grand ringtone thus requires several successive fits, the mechanism having to be extracted for any adjustment during “white ironing” of the caliber. Moreover, it is not only the elements of the assembled movement that undergo retouching during these different phases, which is why they intervene even before the decoration of the case.

Additional difficulty with this unique piece, it was impossible to fit the entire finished movement. Part of the final assembly had to be done directly in the box. Given the level of finish and decoration of each component, including the case, and knowing that any manipulation can potentially alter its quality, the ten operations of installing the caliber, as many times removed for retouching, followed by the final assembly asked for an unusual mastery of the gesture.

In the end, a very small team of specialized watchmakers successfully completed the creation of this 3761 caliber, from development, manufacturing and completion of the various components to final assembly and casing of the movement.

In addition, the sponsor expressed the wish that the cover of the officer’s back of the box accommodates a miniature enamel painting produced by the enamel artist Anita Porchet. His choice fell on The Young Girl with a Pearl Earring by Dutch painter Johannes Vermeer, produced around 1665.

The result recalls the great tradition of miniature enamel painting of which Geneva has made a specialty. Recognized from the end of the 16thth century for its production of quality enamels, Geneva has indeed given its name to several appellations referring to the quality of the work of its craftsmen.

“Geneva enamels”, a term commonly used since that time, thus designate painted enamels covered with a fondant or “Geneva fondant”. This technique consists in adding to the layers of vitrified enamels an ultimate transparent and colorless protection which gives shine and depth to the artist’s work. This invention greatly benefited the timepieces of the time subjected to repeated friction as a pocket watch.

Only a few rare Master enamellers still master these techniques. Just imagine that a single layer of enamel on the turban of the young girl requires at least 2 weeks of work. The color palette matches with, in particular, a composition of 7 shades to obtain black, not to mention the twenty passages in the oven to fix the colors.

In total, seven months of work, intermittently, were necessary to give birth to this portrait. Research and development work, particularly in terms of pigments and enamels to be used, thus started in 2018 with a final result completed in 2020.

If the decoration of watches and clocks using the various enamelling techniques has largely contributed to the reputation of the Fabrique de Genève which, in the 18th century, brought together all the watchmaking and jewelry trades, the “enamels of Geneva ”refer above all to miniature enamel painting.

This process consists of painting on a layer of white enamel applied to a sheet of copper or gold, colors based on powdered metal oxides to which an oil-based binder is added.

The master craftsman thus places his colors like gouache or oil on a canvas allowing the execution, today with a binocular, of the tiniest details. The colors are then fixed at each phase by successive fire passages, without the possibility of retouching.

For the main dial of the watch, the grand feu enamel technique was used in an eggshell hue with blue enameled Roman numerals.

The style of the engravings adorning the case has been the subject of meticulous studies carried out by the engraver of Vacheron Constantin to blend harmoniously with the painting by Vermeer. After several proposals and discussions with the client, his choice fell on a main ornament made up of acanthus leaves running along scrolls and flowers with a beaded heart. This motif echoes the theme of The Girl with a Pearl Earring with its classic and feminine decor.

Thanks to the talents of the engraver, the result is striking. His work begins with setting up the decor with a scribe. She then proceeds to create a champlevé which consists of hollowing out a flat field around the patterns whose volumes are produced by sculpting them with a chisel. The observation and analysis of the pattern is essential to understand the volumes before incising the metal.

To keep the rhythm and suppleness of the acanthus leaves throughout the accompanying line, the curves must be taut. The facets and scratches are then cleaned and polished. This work requires time and patience. Polishing is indeed a delicate operation to find the right balance between the sparkle of the metal and the volumes of the sculpture which lose momentum if they are too rounded.

In order to accentuate the shadows and bring details to the leaves and flowers, hollow and fine lines are made on each of them using the “intaglio” engraving technique or engraving by incision or hollowing out of the material.

Last operation, the chiselling in the background, carried out by hand point by point, accentuates the contrast between the matt chiseled champlevé and the polished patterns. This operation offers a better reading and sublimates the decoration by its shimmering side. The chasing thus creates a decoration or a texture by striking, unlike engraving and sculpture which require removing material.

The ornament of the caseband is further emphasized by a double beaded border, a nod to Johannes Vermeer’s painting. The realization of this edge begins with an equal distribution of engraved squares that run around the bezel and the back.

Then the engraver transforms these squares into half-spheres using a bead, a chiseller’s tool hollowed out at the end in a spherical way allowing by imprint to make metal half-pearls. To handle it, the gesture must be rhythmic and regular. The small pearls with a size of 8 / 10th (0.8mm) are then polished by hand using a brush coated with diamond paste.

The effect must be regular, while keeping the knack which brings a lively side thanks to the similar but unique reflections. This beaded decoration, particularly in vogue at the beginning of the 20th century, requires unparalleled mastery and dexterity.

As an extension of this work on the middle, the bail is in itself a work of art with its two roaring lions. Customer wish, these three-dimensional round-bump sculptures are inspired by classical statuary. Incredibly real, carved from a block of gold, they embody a rare mastery of the gesture.

Before the raw work of the material, the engraver from Vacheron Constantin made several 3D prints to determine the right volumes that would allow her to express her art. For the realization of the heads of the lions, similar but not identical at the level of the mane, she drew with a scribe point the views of the two profiles, from the front and from above.

It is above all a matter of fully understanding the volumes of the head in three dimensions, before starting the sculpture which gradually makes him lose the reference points drawn beforehand. The animal’s head should be imprinted on its mind as a sure-fire landmark throughout the process in order to give it life and character. Observation and precision are essential in the realization of such an animal sculpture, the expression of which can be totally distorted by a gesture too supported.

The engraver first used a milling cutter to roughen the material then chisels for increasingly fine and precise work. The details of the satin, matt or polished textures were obtained using specific tools, some created for the occasion. In total, five months of extremely meticulous work were required for the engraving and sculpture of the various elements of the pocket watch. 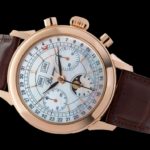