The Jacquemus parade took place from June 27 in the south of France in the Camargue.

Simon Jacquemus is a designer who comes from a small village in Provence: Mallemort.

His first parades are known for their originality. In particular the one which took place in magnificent lavender fields in Valensole, where the models paraded through the fields, on small cleared paths.

This year, to present the autumn/winter collection of the French house called “Le Papier”, the designer organized his show on the impressive salt dunes of Salin-de-Giraud as far as the eye can see, which gives the impression of to be on the moon or on mars.

The designer makes it a point of honor to organize all his fashion shows for these new collections in a place that is dear to him.

Originally from the south of France, his parades often take place in the surrounding regions.

In 2017, Jacquemus organized his parade in Marseille in the Museum of Civilizations of Europe and the Mediterranean.

Jacquemus fashion shows are known not only for being original, but also for welcoming a diverse and varied audience of stars.

During his last new collection in 2017 entitled “La Montagne”, quality personalities were invited.

In an original setting of the Cité du cinema in Saint-Denis, the walls were painted blue, the floor green, models such as Kendall Jenner, Bella Hadid, Adut Akech or Jill Kortleve paraded under precious eyes.

For the occasion, the music was there, represented by Angèle, Youv Dee, SCH in the front row alongside the famous Latin singer Rosalia.

Actresses such as Camelia Jordana were there. Even influencers like Lena Situation (who was recently invited to the Met Gala in New York, making her the first French influencer in the history of the ceremony to attend).

There were of course important fashion heads such as Carine Roitfeld who held a very high position at Vogue.

This year, the casting is just as interesting.

The stars caused a sensation with magnificent shots.

The latter made their appearance while blending into the impressive salt dunes.

Victoria Beckham also caught the eye with her figure dressed in black and a big pair of sunglasses.

English singer Jorja Smith was also there. The latter wore an outfit in perfect coherence with the decor.

In the front row was also the humorist fary, as well as Georgina Rodriguez, the wife of the famous footballer Christiano Ronaldo who was not present.

Actress Simone Ashley, star of Bridgerton season 2 as Miss Sharma, was photographed looking prettier than ever wearing an outfit in the same tones as Jorja Smith.

Who was present at the new Jacquemus fashion show?

Where did the last Jacquemus fashion show take place?

The Jacquemus parade took place June 27 in the south of France in the Camargue, on the impressive salt dunes of Salin-de-Giraud. 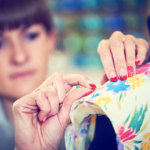